With three days you can experience the serenity and majesty of Uluru, discover the beauty of Kata Tjuta and its magnificent panoramic views, and learn about the area’s significance to the local Anangu people.

See Australia’s most iconic landmark from every angle – by foot, camel, double-decker bus, bicycle, on the back of a Harley or from the air. No matter which you choose, the view of Uluru will not disappoint, particularly at sunrise or sunset.

Start your journey at the Uluru-Kata Tjuta Cultural Centre

The Uluru-Kata Tjuta Cultural Centre is a great place to start your exploration of Uluru-Kata Tjuta National Park. At the centre you’ll find information about activities in the park as well as an introduction to Anangu culture.

The Anangu people are Uluru’s traditional custodians and have lived in the area for at least 22,000 years. At the centre you can purchase Anangu art, watch craft demonstrations, or join a bush tucker session and guided walk.

See Uluru from every angle or take a guided walk

There are many ways to see Uluru. Check out The Mala Walk, which is wheelchair-friendly, and takes you to the caves of the Mala people and to the sacred Kantju Gorge, a quiet waterhole at the base of a dramatic rock face. Only 90 minutes (return), along the way you’ll also see examples of Anangu rock art and learn about their creation beliefs.

The Anangu traditional landowners don’t allow visitors to climb Uluru because it’s a sacred site. Instead, join a walking tour led by an Aboriginal guide.

Take the plunge or go on an adventure ride

If you’re feeling particularly adventurous, take to the skies on an adrenaline-pumping skydive to see the incredible size and features of Australia’s most famous natural landmark. Soak up the panoramic views and take plenty of photos on a helicopter flight, or jump on the back of a Harley Davidson motorcycle for an adventure ride with spectacular views.

Settle in at Ayers Rock Resort

Places to stay are all within the Ayers Rock Resort. Choose from self-contained apartments, hotels, a five-star luxury wilderness camp, backpacker rooms or a campground with sites and cabins. Try a new dining option every night, such as the open-air barbecue where you can buy and cook your own steak.

See the desert scenery atop a camel for a unique perspective. Climb aboard for a quiet, leisurely walk and view the surrounding area from six feet up.

Explore the large red sand dunes in the cool, clear morning and watch the sun rise over Uluru. Your guides will point out the desert flora and fauna along the trail and prepare a breakfast of billy tea and freshly baked beer bread.

Circumnavigate Uluru by foot or bike

Take a stroll or hire a bike near the Cultural Centre, and circumnavigate Uluru on the 10.6km base walk, which is dotted with interpretive displays. It’s a great way to see the many springs, waterholes, rock art caves and ancient paintings at Uluru’s base.

Enjoy a unique dinner under the stars

Make dinner memorable; Sounds of Silence is a unique dining experience that starts on a sand dune with a glass of sparkling wine and canapés, and a 360° view of the sun setting over Uluru and the domes of Kata Tjuta.

Enjoy your next course, a gourmet barbecue of barramundi, kangaroo, crocodile, bush salads and classic desserts, complemented by Australian wines and followed by an Aboriginal dance performance. Coffee and tea is served with an explanation of the night sky, guided by the resident ‘star talker’.

Nearby is Kata Tjuta (the Olgas), meaning many heads, a series of enormous rock domes that date back 500 million years. Start your morning early with a drive to the Kata Tjuta dune viewing area. Only a short walk from the carpark you’ll find magnificent panoramic views of the domes and a relaxing place to sit and absorb the ever-changing colours of the landscape.

Continue on the road to Kata Tjuta and find out just how ancient and imposing the domes are by tackling one of the two popular walking tracks. The Walpa Gorge Walk is an easy walk which takes approximately one hour return and follows a stream to a grove of flourishing spearwood.

The famed Valley of the Winds walk is a moderately difficult 7.4km circuit which weaves through the immerse domes and treats you to spectacular views over the desert plains from its two lookout points.

Take in the views at sunset

Finish off the evening at the sunset viewing area and observe the sun go down over the spectacular Central Australian landscape.

Uluru in 3 days
Uluru in 7 days 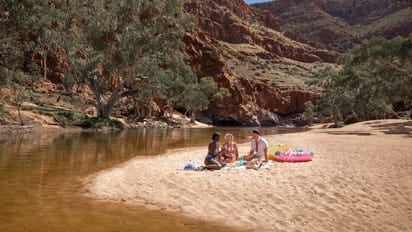 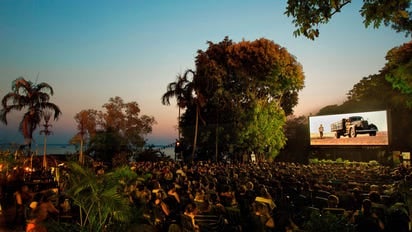 Darwin: a family-friendly getaway in 48 hours 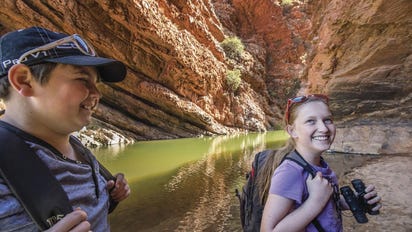