By early 1942, Australia’s male population was scattered throughout the former British Empire with with forces in Britain, the Middle East and in Malaya. As in previous wars, women became active in contributing to Australia’s defence with the Women’s Auxiliary Air Force formed in April 1941, and the Women’s Royal Australian Naval Service formed the same month.

At the outbreak of World War II, Voluntary Aid Detachments were put under military control and in August 1941 the Military Board gave approval for VAD women to serve in hospitals and overseas with the army.

On 10 December 1941, three days after the Japanese bombing of Pearl Harbor, an evacuation order was issued to Darwin residents. By 18 February 1942, apart from Army nurses, fewer than 70 women remained in Darwin, including secretaries, nurses, telephonists, court stenographers, maids, the family of the Postmaster, and Hilda Abbott, the wife of the Government Administrator. They included European, Chinese and Aboriginal women and at least seven lost their lives during the air raids of 19 February 1942, six of them at the Darwin Post Office – including the Postmaster’s wife and daughter – and an Aboriginal, Daisy Martin, at Government House.

Many women stayed on in the Territory, at stations and in townships south of Mataranka. Others tried to stay, including Fanny Haynes, the owner of the Federation Hotel at Brocks Creek, who was forcibly removed. At Tennant Creek the ladies of the Country Women’s Association gained the respect of literally hundreds of thousands of young troops as they handed out tea and cakes to the convoys passing through.

Army nurses were based in Darwin from mid-1941 when 119 Australian General Hospital was established at Bagot Compound. They were the only serving women north of Katherine and occupied a new site at Berrimah in January 1942. Despite being strafed at Berrimah on 19 February they tended many wounded, some working continuously for 36 hours or more. Civilian nurses at the Darwin General Hospital were no less busy and all women in Darwin that day were described as heroines. Nurse Letty Cuttahey recalls caring for the injured.

US servicewomen also served in the Territory, with 86 Station Hospital, which set up a facility near Fenton Airfield in mid-1943. They tended the wounded of the 380th Bombardment Group of the USAAF before moving to Nightcliff, near Darwin, in late 1944. Red Cross ladies also assisted at USAAF airfields and US, British and Australian female film and radio stars travelled with the USO concert shows in the region.

By late 1944 servicewomen were a common sight in Darwin, taking on naval signals and cipher duties, nursing, ordnance, pay and records, intelligence, canteens, legal services and a host of other roles. There were also social activities, with open-air theatre, dances and off-duty picnics. 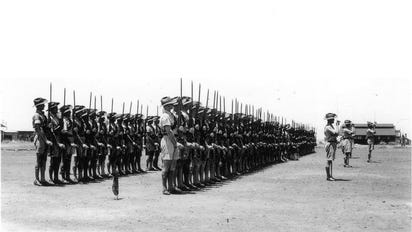