An inside track on the Larapinta Trail

Admire the Red Centre from a perspective like no other; from the ridges of the majestic West MacDonnell Ranges on the Larapinta Trail.

Watching the desert emerge from beneath a blanket of darkness as the rising sun creeps above the horizon, bathing the landscape in a soft golden light, is one of the outback’s most memorable experiences. It’s even more unforgettable when viewed from the summit of one the Northern Territory’s highest peaks, Mt Sonder.

To get to the top before first light had meant rolling out of our swags at a rather ungodly 2am, and a long haul in the dark, the track illuminated only by the light of a head torch. But some things are worth an early start.

Climbing a mountain in the dark is just one of many extraordinary moments on the Larapinta Trail. One of the world’s great long-distance hikes, the 223km trail snakes along the backbone of the spectacular West MacDonnell Ranges (aka the West Macs), and is an adventure like no other.

The trail starts at the historic Telegraph Station on the outskirts of Alice Springs. Established in 1871 to relay messages between Darwin and Adelaide, the station marked the beginning of European settlement in the area.

The first days’ walk to Simpsons Gap, a sacred waterhole surrounded by towering red rock walls, is a stunning introduction to what’s in store, leaving town behind as you walk along the spine of Euro Ridge, the tilted folds and weathered peaks of the West Macs stretching out towards the horizon. These rugged mountains are home to several beautiful gorges and waterholes, places like Ellery Creek Big Hole, where floating in an icy-cold waterhole as the sun goes down is the perfect way soothe sore muscles after a day on the trail.

Other wonderful spots along the trial include Standley Chasm, Ormiston Gorge, Serpentine Gorge and Birthday Waterhole. Walking into these magical and often sacred places provides a whole new perspective that you just don’t get if you drive there.

Split up into 12 sections with bush camps at the end of each one, it takes at least 12 days to do the Larapinta end to end, and you need to be self-sufficient, carrying all your own food and camping gear. Water is usually available from rainwater tanks at most of the campsites.

You don’t have to do the whole trail to see the highlights though – most are accessible on day walks that leave from picnic and camping areas in the West MacDonnell National Park, which can all be accessed along the Red Centre Way, a scenic driving route that will eventually lead you Kings Canyon and beyond to Uluru.

You can also walk the trail with adventure travel companies such as World Expeditions, who run 6-day walking holidays that take in all the must-see sights on the trail with overnight stays in three luxury safari camps, complete with hot showers and camp cooks who whip up tasty meals while you relax. With no need to haul a heavy pack, it’s the best way to absorb the jaw-dropping scenery. 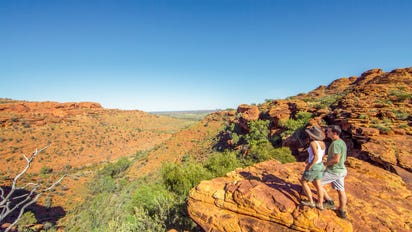 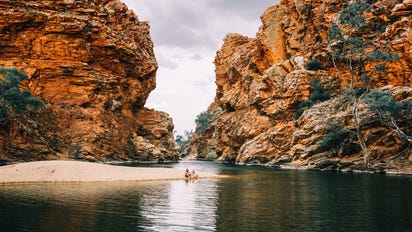 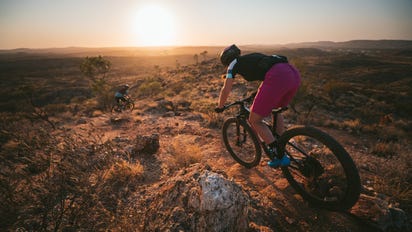